skip to main | skip to sidebar

Riding Under the Lights 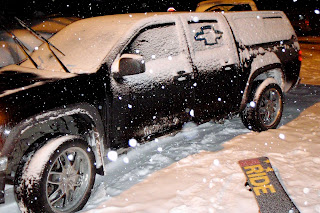 In the movie, “The Sandlot,” Benny “The Jet” Rodriguez can’t wait for the 4th of July because it means he gets to play baseball at night under the light of the fireworks. I know just how he feels, like a pro, indestructible and invincible. That’s exactly how I feel when I ride at night. Like I can jump higher and ride more advanced rails. I don’t know if it’s the fact that there are less people, or if it’s because when I got serious about boarding I was going every Friday night. What ever it is, I love riding under the lights. 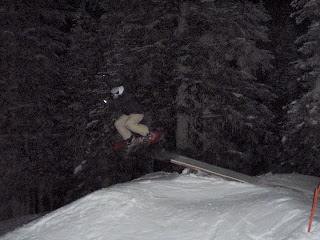 Skibowl is the largest night ski area in North America, and aren’t we lucky that it’s right on Oregon's own Mt. Hood. Skibowl has the entire mountain lit up at night, which is different from the other resorts that only have one or two runs lit up. You can ride in all the same places at night as you can during the day, but it’s night so there are shadows chasing you all the way down the mountain. It feels eerie, but in a good way. 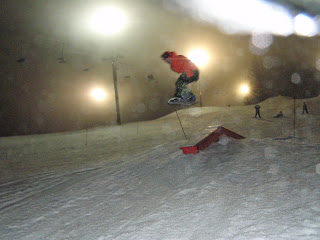 My friends and I like to ride to the top, take a quick break at Champagne Hill and then head for the park off of Multipor, which we ride for most of the night. The park is different at night, there aren’t lines of people waiting for their turn to drop in; it’s just us and a few other people. We usually ride in a big group and we tend to dominate the park so people don’t get in our way. I know I sure wouldn’t get in the way of a group of 10 boarders riding together! 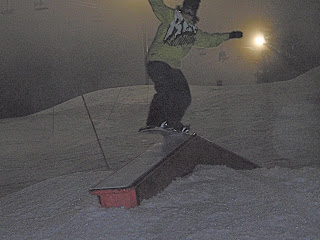 And the best thing about riding at night? Not having to get up at 6 in the morning to make it to the mountain for the first chair! And the worst thing is trying to take pictures in the dark!